Gov. Scott Walker today was noncommittal on whether he believes Wisconsin should adopt something similar to Indiana’s “religious freedom” law, saying it’s not something that’s been debated at any length here “but we’ll have to see in the future.” Indiana’s law, officially the Religious Freedom Restoration Act, has drawn scrutiny in recent weeks with opponents saying it would allow businesses to discriminate against gays and lesbians.

Gov. Scott Walker touted right-to-work for sending a powerful message that “being open for business is more than just a slogan.” Walker’s signature on the bill Monday made Wisconsin the 25th state to prohibit requiring employees pay union dues as a condition of employment. In doing so, Walker used a hypothetical example of who right-to-work would help, describing a family with the father working at a factory and the mother as a nurse in a local community hospital.

Gov. Scott Walker suggested to attendees at the CPAC conference in Washington, D.C., that his experience dealing with thousands of protesters in the state Capitol has prepared him to lead the fight against terrorist groups like ISIS. “If I can take on 100,000 protesters I can do the same across the world,” Walker said.

Gov. Scott Walker suggested to attendees at the CPAC conference in Washington, D.C., that his experience dealing with thousands of protesters in the
state Capitol has prepared him to lead the fight against terrorist groups like ISIS. “If I can take on 100,000 protesters I can do the same across the world,” Walker said. Asked what his plan would be to deal with the threat from ISIS, Walker said he receives threat assessments from the FBI and was concerned not only about attacks abroad, but in the U.S. as well. 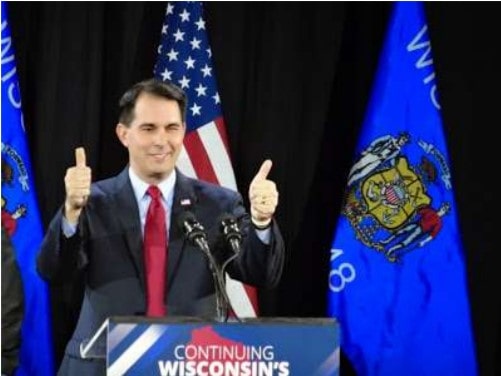 Gov. Scott Walker told a cheering crowd at State Fair Park that “we understand that true freedom and prosperity doesn’t come from the mighty hand of the government but comes from empowering people to live their own lives,” as he won his third statewide election in four years. Walker, who was up by 9 percentage points when Dem opponent Mary Burke conceded, referred to America and to Washington throughout the speech.

Mary Burke on Thursday said she stands by her performance record at Trek Bicycle and called former Trek COO Tom Albers a liar with “an ax to grind.”
Burke linked claims this week by Albers and former Trek employee Gary Ellerman that she had been fired by Trek to what she called Gov. Scott Walker’s
efforts to attack the Wisconsin bicycle manufacturer founded by Burke’s family.

President Barack Obama will be in the state later today for a rally with Dem guv candidate Mary Burke at Milwaukee’s North Division High School.
The visit follows an appearance in Milwaukee by former President Bill Clinton last week, but Burke yesterday downplayed her campaign’s emphasis on the state’s largest city.

Former President Bill Clinton focused on Wisconsin’s economy and stressed the importance of minimizing political divisiveness in a Milwaukee appearance for Mary Burke Friday. Clinton said the Great Recession “was horrible for everyone” but that economic recovery continues to lag in Wisconsin.

Gov. Scott Walker said today that no state business is being conducted via personal emails, as he continued to face scrutiny over thousands of newly released documents having to do with how he ran Milwaukee County as county executive from 2002-2010. “There is not, has not, been any state business conducted that way,” said Walker, when asked if personal emails are involved in his current administration.

Dem Mary Burke Friday slammed Gov. Scott Walker for what she said was a lagging economy, knocking his claim the state does not have a jobs problem.
In their second and final debate, Walker countered by seeking to tie Burke to his predecessor, Jim Doyle. Walker said several times through the course of the hour-long exchange that his Dem rival had previously said she completely supported Doyle’s policies, which he said led to a fiscal mess in Wisconsin that he cleaned up after taking office.