Gov. Scott Walker Saturday defended his actions directing campaign contributions to the Wisconsin Club for Growth, saying “there isn’t
anything wrong” with doing so. Details on Walker’s fundraising on behalf of the 501(c)(4) were included in a batch of documents briefly released late Friday as part of an ongoing suit over a John Doe investigation into allegations that Walker coordinated with conservative groups in the recall elections.

Maryland Gov. Martin O’Malley touted Mary Burke’s candidacy for Wisconsin’s chief executive, but largely directed his remarks at Gov. Scott Walker, calling
him “a devoted follower of trickle-down economics if ever there was one.” O’Malley, who spoke Saturday evening in Milwaukee at the Democratic Party of
Wisconsin’s 2014 Founder’s Day Gala, said, “Prosperity doesn’t trickle down from the top and it never has.

Gov. Scott Walker today called Dem gubernatorial opponent Mary Burke’s claim that Wisconsin wages are declining at double the rate of other states “an outright lie.” “It just shows that the opposition will do and say anything regardless of the facts,” Walker told reporters following an appearance at Badger Alloys in Milwaukee. 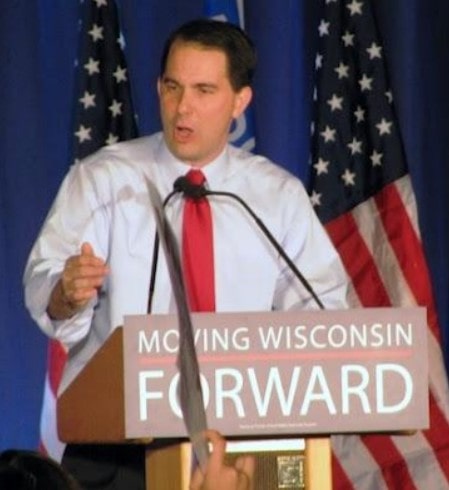 “Tonight we tell Wisconsin, we tell our country and we tell people all across the globe that voters really do want leaders who stand up and make the tough decisions,” he said to thundering applause at a packed exposition building on the Waukesha County fairgrounds.

When Gov. Scott Walker made his victory speech Tuesday night, he mentioned his desire to move forward and put the rancorous election behind him.
“I’m committed to it whether you voted for me or not,” said Walker, suggesting meetings with Dems over beers and brats. Some Walker supporters at his victory party agreed that Walker should try to heal the rift. But many others — along with some GOP politicians who were present — defiantly rejected the idea of reaching out to the other side. 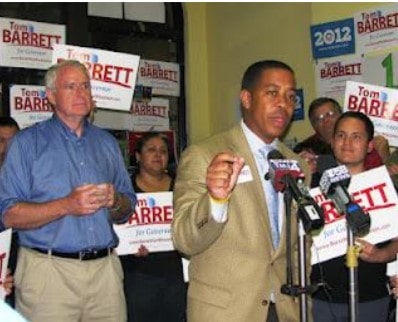 An animated Tom Barrett, wearing a blue shirt with his sleeves rolled up, told his supporters that “the biggest day in Wisconsin history” is tomorrow.
“We saw the largest grass-roots movement that has ever been part of Wisconsin,” Barrett said to wildly cheering volunteers at a campaign office on Milwaukee’s near south side.

Gov. Scott Walker rallied supporters Saturday, telling them every voter contact will make a difference come Election Day, and said any suggestion he’s become a target of the John Doe probe are “100 percent wrong.” After several stops across the state Saturday, Walker hit a campaign office in Wauwatosa. He told reporters he has not heard anything further from the Milwaukee County DA’s office about the John Doe probe that has ensnared his former aides from his days at Milwaukee County executive. He brushed off a report from Current TV’s David Shuster that the guv has been told he’s a target of the probe as “spin from those on the left.”

With a historic recall election only days away, underdog Tom Barrett accused Scott Walker of using “Willie Horton stuff” while the Republican governor fended off Barrett’s charges he couldn’t be trusted. “My integrity has always been high,” Walker said at the final of two debates before Tuesday’s recall election. The statewide televised debate was co-sponsored by WisPolitics.com.